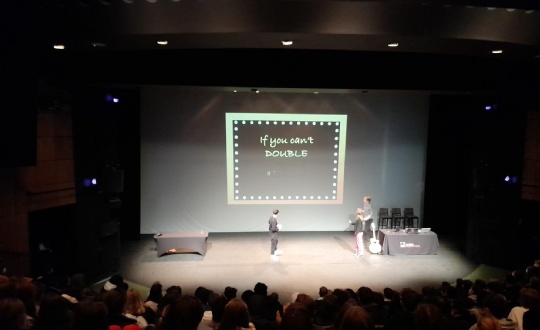 On Tuesday 1st February we took 48 of our most able Year 11, 12 and 13 mathematicians to the Maths Inspiration Lectures in Cardiff. The lectures are designed to motivate and inspire young people, with a focus on real life applications of mathematics. This session included talks from Rob Eastaway, best known for his books including the bestselling Why Do Buses Come in Threes? and Maths for Mums and Dads, Sammie Buzzard, a climate change expert, and Ben Sparks, mathematician, musician, and public speaker.

The students really enjoyed the guest speakers, particularly Ben Sparks, and two of our students were called on stage to participate in the show. Rob Eastaway invited Kieron S to the stage to compete in a game of Double Trouble. Kieron had to take turns with another student to double the previous number, mentally. He performed brilliantly, managing a significant number of mental calculations under great pressure!

Liam L was invited on stage by Ben Sparks, after betting him £1 (with the potential of winning £20 from Ben, if he was correct) that no one in the first 5 rows would have a birthday on the same day. When Ben showed the students the maths behind the bet, they were shocked to discover that you only needed a group of around 60 people, to have over a 99% chance that two of them have a birthday on the same day! Due to these odds, Liam lost the bet, but did win a big packet of sweets for his involvement which, Ben assured him, cost £1.10.

Students then enjoyed the afternoon shopping, sightseeing and having lunch in Cardiff city centre. Two hours later, all 48 students were back at the meeting point with time to spare, and full of tales of their afternoon. They were all fantastic ambassadors for the school and an absolute credit to themselves and their families. We thoroughly enjoyed taking them out for the day and look forward to running the trip again next year!